Snowdogs have taken over Tyne and Wear!

And if you follow me on social media, you’ll have noticed I’m quite keen to find them all.

The Great North Snowdogs trail is made up of 60 large and 97 small statues.

They have been decorated by artists and school children and installed across North Tyneside, Northumberland, Newcastle, Gateshead, Sunderland and South Shields.

They will be auctioned off in aid of St Oswald’s Children’s Hospice at the end of the trail. 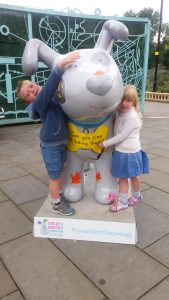 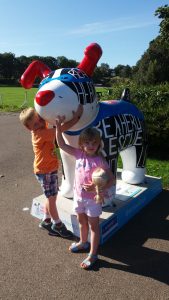 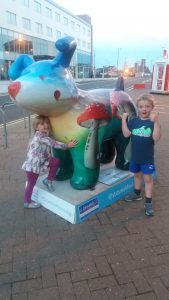 Some of my favourite artists are among those who have decorated the snowdogs.

Joanne Wishart, whose work hangs on my living room wall, has Tails of the Sea in Sunderland and Skipper at North Shields Fish Quay.

My children love the books by Helen Stephens and the author and illustrator has Hiding Lions at Sunderland Winter Gardens.

Graffiti artist Frank Styles does some brilliant calligraffiti and he has Graffiti Dog in Gateshead and SAFC Spraydog at the Stadium of Light in Sunderland.

The Snowman and the Snowdog, the Raymond Briggs characters that inspired the trail, can be found painted on Arthur at the Theatre Royal, by Jeff Rowland. 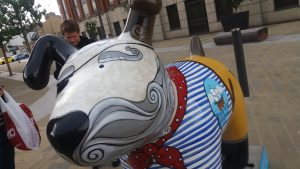 Tails of the Sea 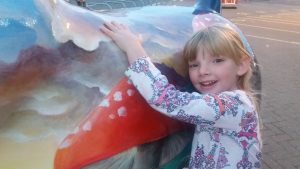 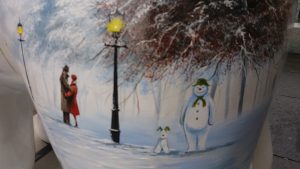 The Snowman and the Snowdog on Arthur

My daughter’s favourite so far has been Wonderhound by Illona Clark, at the Stadium of Light, while her brother likes Rhino’s Rescue by Leighton Denny, in South Shields.

Naturally, we found all the ones in our home town of South Shields first!

But there are plenty more to tick off the list before the Snowdogs bid farewell to the region in December.

We’re doing so via the app, but we’ve also bought the printed maps, the proceeds from which also go to St Oswald’s.

The auction will take place at the Sage Gateshead on December 6.