It’s like the founders, Mary and Rob Wright, can read my mind!

Last month’s box had a Letterpress theme, which I absolutely adored, so I couldn’t wait to see what March’s box had in store for me.

I’m pleased to say that I was not disappointed. 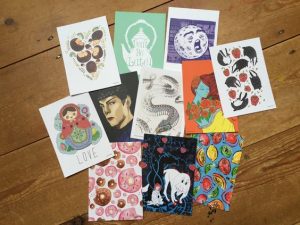 Some of the Spotlight Stationery postcards designed by young illustrators.

The first thing I opened was the bright blue envelope packed with four postcards designed by young illustrators, which is a feature of each box.

One was a sketch of the Empire State Building, by Tilly Gibbs, which has gone straight on my noticeboard, as I dream of a return trip to the Big Apple on a pretty much daily basis.

Another postcard, by Victoria Ball, featured a row of buildings in Burntisland in Fife, Scotland, where we stayed for a few days during the Easter holidays last year.

This month’s theme was Double Act, inspired by a reversible notebook from Daycraft.

“We spotted this rather special Signature Duo notebook at a trade fair in Birmingham and immediately started building a theme around it,” said Mary. “Dot grid or lined paper, whichever you need.”

Not only is the notebook in my favourite colour, but it arrived just as I decided to start keeping a bullet journal. It’s a shame it didn’t arrive before shiny new Leuchhterm 1917, but I’ll definitely be keeping it to one side for future bujo use! 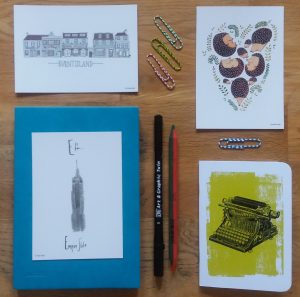 The contents of the Double Act box.

I’ve been keen to try a Kuretake Zig pen for a while, so I was delighted to see an Art and Graphic Twin in the box. There’s a brush on one end and a fine tip pen on the other. Perfect for my brush lettering practice!

There was also a jumbo double-ended red and green pencil from Legami to get creative with and double-coloured jumbo paperclips for colourful organising.

The final piece was a notebook from Spotlight Stationery’s own range, which can be used from either end. I love the vintage typewriter on the cover, set against a green background on one side and orange on the other.

Once again you can see the package has been carefully put together and from a business perspective, I think it’s fair to say Spotlight Stationery really knows its audience! I can’t wait to get stuck into some projects and start using the contents from the last two boxes.