I was thrilled when I was asked to help create a special gift for Embellish Box recipients.

Having reviewed one of the first subscription boxes, I know the creator, Amy Purdie, likes to include goodies that complement her beautiful papercut templates.

When I opened the hygge-themed box in December, I was over the moon with my woollen gloves, candle, hot chocolate mix and candy cane.

(You can read all about it here.)

So it was nice to be given the opportunity to pass on that same happy, smiley feeling. 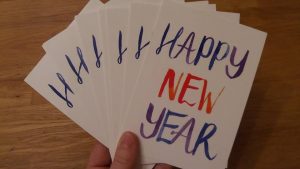 Amy asked me to come up with some lettering for a Happy New Year postcard that she wanted to include in her December box.

She’s a designer herself, so it was quite a compliment!

The theme was Winter Joy and the colour scheme was bright pinks, oranges and yellows, set against a navy background.

My instinct was to write a brush-lettered greeting, but I also did copperplate and modern calligraphy samples in blue and gold and left it up to Amy to decide which to use.

I was really pleased she went with the brush-lettered piece for the main image on her card, with the navy blue copperplate script making it on to the back.

My lettering was scanned in and printed onto the A6 cards and Amy was kind enough to send me some copies, which I sent out in lieu of Christmas cards to some contacts! 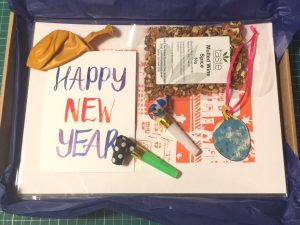 They looked great in the box next to her latest papercuts and backing papers, a balloon and party blower, wooden bauble and a pack of mulled wine spices.

She also wrote me this lovely testimonial: “I asked Angela to help me out with some beautiful lettering for my postcards to go in my subscription box.

“Angela listened to what I was after, took note of the colour scheme and created three options for me to choose from.

“I used two of them, but they were all perfect!

“I will definitely be asking Angela to help me again in future boxes, the postcards came out beautifully and I was really excited to see them in the box alongside the other items.”