My husband asked me if I had any notebooks the other day. Me, his stationery-loving wife of almost 10 years, who has done nothing to hide her love of paper!

I could have offered him one of the six I have stashed away from my last two subscription boxes from Spotlight Stationery.

Then again, that would have meant sharing my stationery, so I sent him packing with an A4 pad he’d brought home from work previously.

July’s theme was Space: The Final Frontier and had I been minded to share my stationery with my husband, he would have loved it. 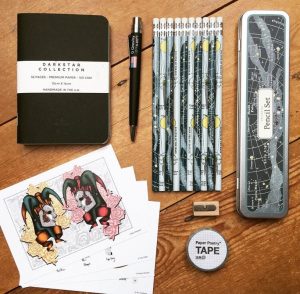 From San Francisco-based Cavallini & Co there was a set of 10 pencils, plus sharpener, in a presentation tin, featuring vintage ‘celestial’ images from the Cavallini archives.

The Spacetec 0 Gravity pen from German pen maker Diplomat can actually be used in space.

It writes in 0 gravity, as well as upside down, in extreme temperatures and underwater.

I’ve only tested the upside down claim, but it worked!

The nice finishing touch for me was the Paper Poetry washi tape from Rico Designs in Germany, featuring gold stars on a pale blue background.

Retro, like the previous Letterpress theme, could have been made for me. 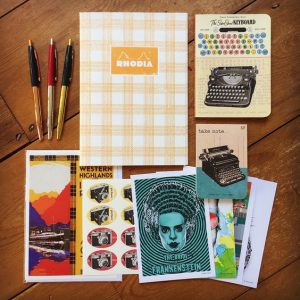 August’s box came with a limited edition Rhodia notebook, a set of metal ballpoint pens, two notebooks featuring more of Cavallini’s beautiful vintage images and a greetings card based on a vintage poster.

Rhodia’s plain pads are already my go-to for calligraphy practice, so I’m looking forward to testing the A5 Rhodia Heritage, which has a gorgeous gatefold cover and gridded Clairefontaine 90gsm paper.

The Kikkerland pens remind me of the ballpoints my grandad always seemed to have lying around the house, but the colours are bang on-trend. The copper one in particular matches my new 2018 diary very well!

The Cavallini archive spans hundreds of years and preserves a vast array of images, from 19th century anatomical charts to mid-century travel guides, from maps to botanical plates, which they apply to their notebooks and other products.

The notebooks feature retro cameras (making me think of my amateur photographer grandad once again) and a typewriter – perfect for an ex-journalist (not that I ever used one, but I got an electronic one for Christmas one year as a child).

The card is inspired by a series of posters from the 1930s entitled Transport in Scotland and looks like an old advert for the Western Highlands.

Both boxes once again feature work by young artists and illustrators via a series of postcards.

To find out more about Spotlight Stationery, click here.