In the spirit of last week’s post about the Just a Card campaign, I thought I’d highlight a few north east creatives I’ve been delighted to support recently.

The list is by no means extensive. Since I started running my own business three years ago I’ve been introduced to a wide range of self-employed superstars doing their own creative thing.

The majority of them have been women, thanks to my involvement in the Inspire Network, although there are plenty of male creatives out there shaking off the shackles of the 9-5.

So, kicking off with the message of Just a Card… 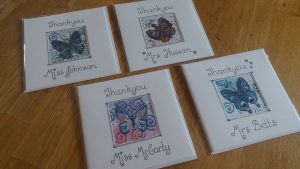 Artist and illustrator Lorraine Hall and I share the same graphic designer in Hollie Ellis and a love of lettering.

Her cards are absolutely beautiful – watercolours with a bit of bling – so when it came to the end of term, I knew exactly where I’d be buying my children’s teacher cards from.

Lorraine did a fantastic job and her customer service was spot on from the moment I got in touch.

We discussed designs and colours, opting for butterflies and a mixture of pinks and purples (chosen by Sophie) and greens and blues (chosen by James).

The kids loved that they had such special cards to hand over and I’m sure they will be treasured by the teachers and teaching assistants they were presented to.

And, in case you were wondering, they were no more expensive than cards from a good quality high street retailer – and I would have happily paid more.

Hanging By A Fred 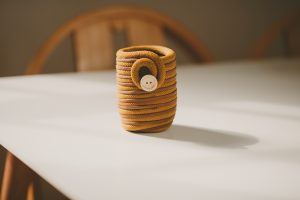 I love the story behind Freddie Matthews’ business.

You can read it on her website here, but in short, she started making things with her dad’s old climbing rope after he passed away following a short battle with cancer, as mementos for loved ones.

Amazed by the results, she then looked at designing a range of jewellery and, spurred on by the positive feedback from her family and friends, launched Hanging by a Fred in November 2015.

I’ve bought several things from Freddie – a matching bracelet and necklace for my best friend, a survival bracelet for my dad and a bespoke pen pot for me.

My pen pot has drawn a lot of admiring glances at my workshops and made a lovely prop at a recent photoshoot for some new business images. 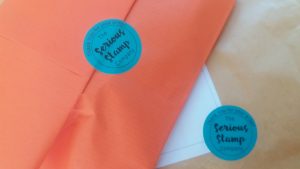 I’ve been following Clare Freemantle at The Serious Stamp Company on Twitter for a while and ordered a gift for my daughter’s teacher last month.

It doubled as an end-of-year gift and a wedding present, as she was getting married over the summer holidays and would be returning to school under her married name.

So, we ordered a smiley face stamp saying ‘Mrs Fittis says fantastic’ and an ink pad in the school’s colour of Royal Blue, as she was also leaving the school.

Clare’s turnaround was swift and the stamp was perfect, arriving in beautiful, bright packaging, which is always a winner with me!

Start With a Doodle 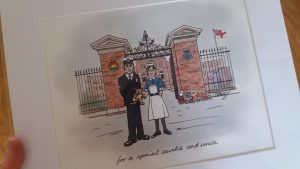 Gail Armstrong came along to one of my workshops and introduced me to bullet journaling, so we’ve been creative buddies for a while.

When I first saw her ‘Jenny Wren’ design, I had it earmarked as a future birthday gift for my auntie, who, like Gail, had served in the Royal Navy for many years.

Then I saw the personalised portraits she had done for other ex-Royal Navy personnel, just as my sister and I needed a special ‘thank you gift’ for said auntie and her husband.

Our uncle also served in the Royal Navy and the walls of their home are filled with pictures (including some of our early artwork) so we knew one of Gail’s pieces would be perfect.

We told her as much as we could about their naval background, their hobbies and interests and sent photographs of them in uniform.

Gail’s attention to detail was such that she requested a close-up of my auntie to make sure the folds of her white cap were drawn correctly!

We were overwhelmed with the results, which showed them standing outside RNH Haslar, with its badge and that of HMS Aurora on the gateposts and a collection of teddy bears.

We sent it off in then post as a total surprise and reduced our auntie to tears – in a good way.

It’s being framed at the moment and we are assured it will take pride of place.

That’s what you get when you buy from an independent artist, designer and maker – a personal touch that can’t be mass produced.

So next time you’re looking for something special, or just an everyday item like a greetings card, seek out some local creatives who can do the job.

There’ll be someone like Lorraine, Freddie, Clare, Gail – and even me – who’ll be glad that you did.