If you follow me on Instagram, you’ll know I’ve been taking part in the European Pointed Pen Collective (EPPC) Copperplate Envelope Exchange.

The EPPC was established in January 2019 by calligraphers Kate Watson and Cecilia Boschi, along with co-founder Christina Janoszka, to share their love of pointed pen calligraphy by creating unique, specific workshops for other pointed pen artists.

Cecilia has been a member of The International Association of Master Penmen, Engrossers and Teachers of Handwriting (IAMPETH) for several years and runs CeciliaB Calligraphy.

Kate is also a member of IAMPETH and served on the South London Lettering Association committee for two years. She runs Olive and Reid Studio and her clients include Cartier, BBC, Tiffany & Co, Sky UK and Hugo Boss.

The EPPC hold events throughout Europe and in the wake of Covid-19, they’re also doing a lot of online activity at the moment, including the Copperplate Envelope Exchange.

More than 90 calligraphers from 24 countries signed up to take part and were divided into groups of four.

I was matched with Ere Evelasco from Mexico, Weronika Kowalska from Poland and Jane Matsumoto from California, USA.

I also sent envelopes to Kate in London, England and Cecilia in Italy. 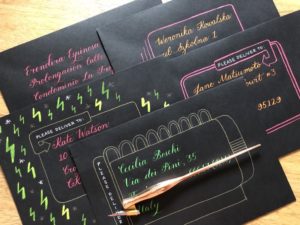 My designs were inspired by the neon watercolour half pans I bought from Nibs, Pens, Ink and Things for the now-cancelled late shows.

Desperate to put them to good use, I grabbed some black envelopes to show off the colours and gave them an 80s-style makeover, taking inspiration from the neon signs of Las Vegas, Radio City Music Hall in New York and Stranger Things’ Starlight Mall.

I spent part of my honeymoon in Las Vegas and our last foreign trip was to New York in October, so I channelled a lot of happy memories into my mail.

I also added some handwritten letters, blank postcards and some vintage nibs.

Fortunately, I was able to post my envelopes and I was very appreciative of the Post Office counter assistant’s careful placement of the stamps around my calligraphy!

We also sent them digitally, just to be on the safe side, so my mail from Ere, Weronika and Jane arrived via Instagram – and they blew me away. 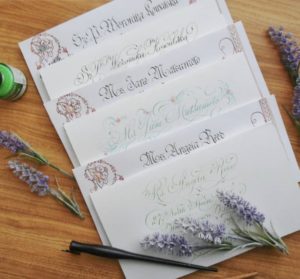 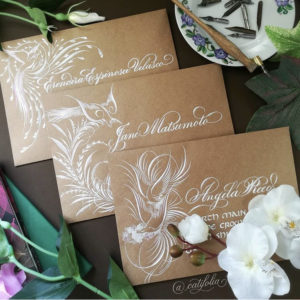 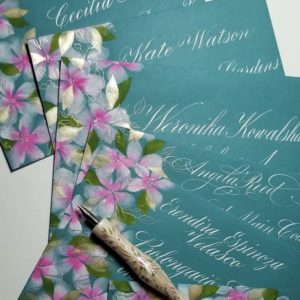 Ere’s address is by far the most beautiful address I’ve ever written, to the point where I didn’t want to add anything else to the front of the envelope.

Ere created two replies, one in Engrosser’s Script and one in a pointed pen interpretation of Gothic Fraktur, with a border inspired by 15th century manuscripts. 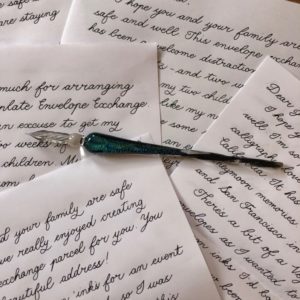 I feel so honoured to receive these beautiful pieces of artwork at such a strange time for us all.

Taking part in the exchange forced me to pick up a pen for the first time in a fortnight and create something that would help spread a little joy in the world.

I’ve also made three new calligrafriends and been inspired by many more whose work I have admired by following the hashtag #eppc_envelopeexchange on Instagram.

The EPPC is holding a series of Insta Live Chats with calligraphers at the moment.

If you miss the live feed, they’re also being uploaded to the website – www.pointedpencollective.com – so you can watch them in your own time.