It’s certainly something I have become more aware of since starting out, particularly via the networking groups of which I am a member.

There are plenty of tales of success, but other tales of woe as some business owners struggle to make ends meet and live with constant doubt about their business.

Creative businesses tend to be hit hardest by these fears – many are one-person bands, shouldering everything from sales and marketing to the actual making of their products.

Social media has opened my eyes to these struggles – but also to the sheer number of fantastic people that are out there to buy from.

So, how can you help this Christmas?

I love the Just a Card campaign – even though its regular Twitter hour is a danger to my bank balance! 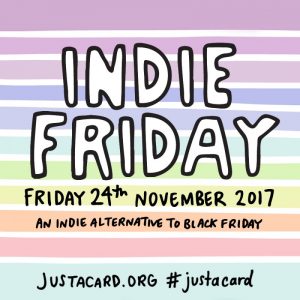 I have discovered so many artists, designers and makers and actually bought from them as a direct result of them hawking their wares via #justacard every Thursday, from 8pm to 9pm.

There are real people behind these products – they’re not mass produced in a factory, but lovingly handcrafted. Independent stores are also championed.

(You can read more about the campaign here.)

Just a Card’s latest initiative is an alternative to Black Friday – Indie Friday.

All you have to do as a customer is pledge to support independents and shop local, while businesses can make as much noise about themselves by using #JACIndieFriday on social media.

The Just a Card team will be sharing furiously! 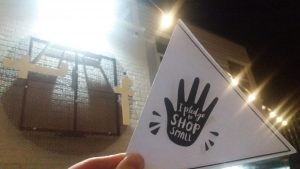 This was the case when I stumbled upon Holly & Co via Lola Hoad Design.

Holly & Co was founded by Not on the High Street co-creator Holly Tucker to champion and advise small business owners, artisans and creatives.

Campaign Shop Small is its festive theme but also a long-term campaign to change people’s way of thinking and encourage them to shop small.

“We all have the ability to change so many businesses lives with our actions,” Holly writes on her blog. There’s even a little flag to download and a hashtag #campaignshopsmall.

I took my flag along to the Thought Foundation in Birtley on Saturday for its Thoughtful Night Market run in conjunction with The Crafthood and put the words into action.

Small Business Saturday is hitting the UK for the fifth year on Saturday, December 2. 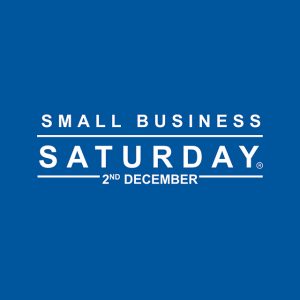 Many small businesses take part in the day by holding special events or offering discounts.

In 2016, customers spent £717m with small businesses on Small Business Saturday, an increase of 15 per cent on 2015 spending.

Over 140,000 Tweets were sent out on the day, reaching 130 million people, trending on Twitter in the UK and globally.

More than 80 per cent of local authorities actively supported the campaign in a variety of ways, from networking events to free parking.