Love is in the air as Valentine’s Day approaches this weekend, but what’s it all about? 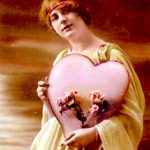 The romantic celebration recognised today in many countries around the world started life as a liturgical celebration of one or more early Christian saints named Valentinus.

Several martyrdom stories were invented for the various Valentines that belonged to February 14, including that of Saint Valentine of Rome.

It is said he was imprisoned for performing weddings for soldiers who were forbidden to marry and for ministering to Christians, who were persecuted under the Roman empire.

According to legend, he healed the daughter of his jailer, Asterius, and before his execution, he wrote her a letter signed ‘Your Valentine’ as a farewell. 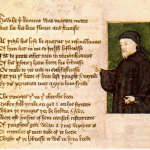 The day was first associated with romantic love in the circle of Geoffrey Chaucer in the High Middle Ages, when the tradition of courtly love flourished.

In 18th-century England, it evolved into an occasion in which lovers expressed their love for each other by presenting flowers, offering confectionery, and sending greeting card.

Since the 19th century, handwritten cards have given way to mass-produced greeting cards.

The earliest surviving valentine is a 15th-century rondeau written by Charles, Duke of Orleans, to his wife, which commences:

At the time, the duke was being held in the Tower of London following his capture at the Battle of Agincourt, 1415. 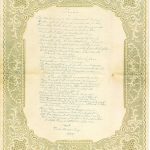 The earliest surviving valentines in English appear to be those in the Paston letters, written in 1477 by Margery Brewes to her future husband, John Paston.

In my calligraphy class this term, we’re working towards writing a sonnet – a poetic form which originated in Italy and is often associated with love – in our newly-learned copperplate style.

I’ve chosen How Do I Love Thee? by Elizabeth Barrett Browning.

Do you have a favourite piece of romantic writing? Please tell me what it is and why below and I’ll choose one to write out.