For the last month I’ve been taking part in an Instagram challenge called #MarchMeetTheMaker.

After falling in love with the social media platform when I first joined almost two years ago, I was starting to feel a bit ‘meh’ about it.

Constant algorithm changes mean it’s becoming increasingly difficult for small businesses to get their content in front of their customers – unless they pay for it.

My reach has varied in the last six months from 117 to 407 (with a following that has just passed the 500 mark). I’ve also been receiving about half the number of likes per post.

Naturally, I started to wonder where I was going wrong! 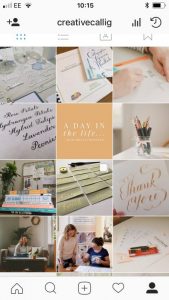 I’ve been doing some work around Instagram, researching hashtags and making sure my images are up to scratch – although they’re not always perfect.

A recent mentoring session with the brilliant Nicola Little from Digital Sparkles has helped me define how to use it in the future.

But taking part in #MarchMeetTheMaker – founded by designer and illustrator Joanne Hawker – has taught me a few things too.

It has certainly helped with the planning side of things, with daily prompts encouraging makers to show of various aspects of their work, from their workspace and tools to dreams and plans for the future.

What #MarchMeetTheMaker has taught me

First of all, I now know how to use Instagram Stories!

Stories…A Day in the Life Of was the prompt for Day 21 and I posted a picture a workshop attendee had sent me of her calligraphy-themed birthday cake. 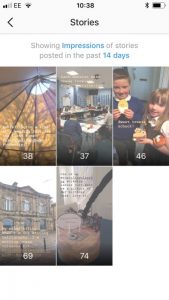 It was viewed by 74 people before disappearing into the ether after 24 hours.

Nicola told me that a lot of people don’t bother scrolling through their Instagram feed, they just watch the stories, which I was surprised by.

So, I’ve been watching more stories – and over the course of #MarchMeetTheMaker I’ve even been mentioned in two stories created by other people!

I’ve also made a conscious effort to comment on other people’s #MarchMeetTheMaker posts – it is called social media after all.

It helped that the UK Wedding Stationery Collective, of which I’m a member, came up with its own #ukwscmtm hashtag so we could find each other’s #MarchMeetTheMaker posts.

Getting to know other members of the group in this way has made me less of a lurker in the Facebook group and I’ve been contributing more to discussions.

Interacting with other people’s posts has also had a direct and positive impact on the interaction I’ve received on my profile.

I’ve had more profile visits, more website clicks and an increase in reach when posting every day, as well as my first sales enquiry direct via Instagram.

So, engagement really is key when it comes to managing your social media as a business.

You can give me a follow @creativecallig and let me know what you’d like to see more of in the comments below!