I’m not one to advocate making people cry.

But it’s nice to know that something you’ve created has touched a nerve with someone.

And happy tears are ok, right?

Two recent calligraphy projects had the desired impact when they reached their intended recipient.

The first was something I made for Michelle Rose from Custard and Bear, who is a great source of advice and support when it comes to marketing.

I was intrigued when she tweeted a link to wedding blog Brides Up North that featured a story about her 2008 wedding to husband Kieran.

Turns out one of their wedding photos appeared in a music video for the band Train. Amazing. 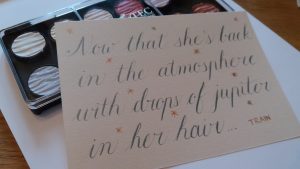 Inspiration struck and I decided to write the opening lyrics from the song Drops of Jupiter for her, after finding out how special the song was to them.

It was a good excuse to put my new Finetec Colours palette to good use and it also tied in nicely with my InCoWriMo project.

Her response almost had me in tears!

She wrote on Facebook: “When was the last time you got a ‘just cos’ letter in the post, something for no other reason than for the pleasure of sending and receiving?

“(And today the ‘secret’ Valentine’s from your dad doesn’t count!)

“Angela from Creative Calligraphy saw me post about going to see Train later this year, how we were featured in one of their videos and how they’ve been the soundtrack to the past 17 years of mine and Kieran’s life together.

“And today I received this beautiful quote from ‘Drops of Jupiter’ in the post… with just a simple note to say she had loved her story. I was touched beyond measure, I cried happy tears.

“Is this marketing? Oh yes, bloody yes, yes, YES! Angela hit my emotional buttons and I’ll not only treasure my quote forever but will also tell this little story lots and lots from now on… bloody genius marketing – I’m impressed!!

“Thank you Angela, thank you so much.”

I hadn’t thought of it as marketing, at least not past the point of having a nice piece of calligraphy to share on my social media channels. I just like surprising people! 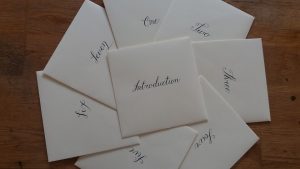 I helped Jamie Gray create a surprise for his puzzle-loving partner, Gemma Spurr, which I’m sure she will never forget.

Having booked a trip to New York, he came up with the idea of creating a treasure hunt to reveal the news.

Concerned his handwriting wasn’t up to scratch, he got in touch with me to write the clues on some cards and number the envelopes.

He then sent them off to the hotel, where they were due to stay one weekend, to be hidden around the premises.

Jamie said: “The cards led through the lovely gardens, into the spa and pool, into the conservatory and bar areas and eventually back to our room for the big reveal.

“There were tears on both sides. Gemma absolutely loved the cards and thought they had been printed they were so lovely.”

I was excited about the commission from the moment Jamie first got in touch, so I was delighted to hear his idea worked out as planned – with the added bonus of tears.

Mind you, I’d weep with joy if someone booked me a surprise trip to New York!