I had a fantastic time at Newcastle Does Vintage at the weekend.

After running calligraphy workshops at a previous event in April this year, I was delighted to be asked back by the organisers, Britain Does Vintage.

There were two sessions, the first of which was fully booked, both attracting a varied crowd. 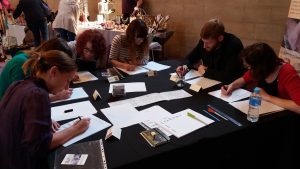 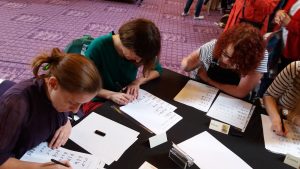 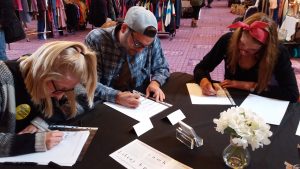 The first included a couple who had travelled from Leeds to attend the vintage fair.

I was also joined by an interior architecture student and an illustration student for the second session – so no pressure there then!

Some had tried calligraphy before, while others were totally new to it, but everyone who came along was very enthusiastic.

Once they started writing, they seemed to attract a bit of a crowd! 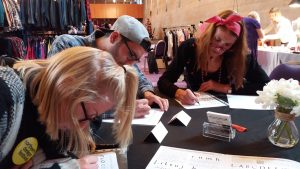 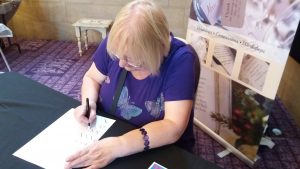 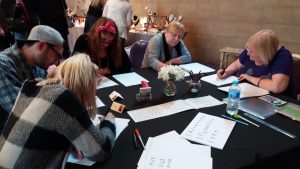 I took along the packs I usually hand out to people to work on over a longer period of time than the 30-40 minute sessions we had booked in.

But they got to grips with the beginners pens I like to use, from Manuscript Pen Company Ltd, very easily and came up with some impressive scripts.

I like to start people off with the foundational hand, as it is very rounded and the letters are based on the circle and the square, so they are easier to form.

I look forward to them sharing their progress and perhaps even coming back for more!

To book a place, contact Britain Does Vintage via e-mail info@britaindoesvintage.co.uk.