During lockdown, I’ve been turning my business back into a hobby.

Both were via Zoom and if it wasn’t for the fact that Covid-19 has forced a lot of calligraphy workshops online, I’m not sure I would have had the opportunity to take part otherwise. 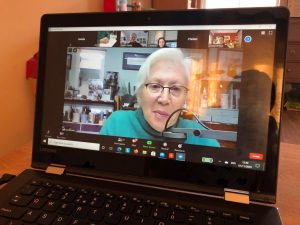 Heather’s workshop, The Poetic Pen, was organised by The European Pointed Pen Collective, which has done a great job in keeping the calligraphy community connected this year.

It took place over two evenings, followed by a six-week boot camp.

There were well over 100 participants all desperate to learn this delicate hand from Heather, who first picked up a pointed pen in 2003 and has been teaching since 2010.

Italian Hand is rooted in Italics and dates as far back as 1560, with countries including Italy, Spain, France, Holland, Germany and England developing variations of the hand in the 1600s.

It was used for over 300 years before dropping off the scene entirely, although it influenced English Roundhand, Spencerian and other ornamental scripts. 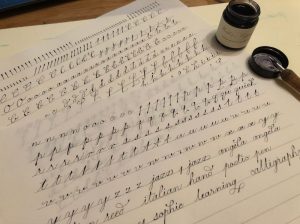 My first attempts at Italian Hand

In our first lesson, Heather described Italian Hand as “playful, joyful and exuberant”.

She encouraged us to bring our own nuance to the script, taking what we like and discarding what we didn’t like from the various historical examples.

(Penmanship Made Easy and The Universal Penman, both by George Bickham, are the latest additions to my calligraphy library on Heather’s recommendation.)

Not having a set way of doing things is something I usually struggle with – that’s why I prefer the more structured, traditional calligraphy scripts.

But I’ve enjoyed pushing the boundaries of my comfort zone – with Heather’s guidance and the encouragement of other students via our dedicated Facebook group.

So far, my practice has been inspired by Harry Potter and The Lord of the Rings. 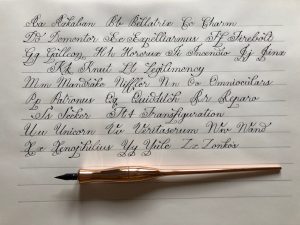 The first piece of homework involved creating a ‘snapshot’ of our Italian Hand as an A-Z exemplar, featuring an upper case letter, lower case letter and a word.

In the second week of boot camp, we had to produce a quote and the challenge for the third week was to look for the beautiful in your work.

The fourth week was to write in silence for 20 minutes in your current Italian Hand and jot down your thoughts afterwards.

For Week 5, we were encouraged to work on darker papers with lighter coloured inks and the prompt for the week was hope.

For Week 6, we wrote another A-Z exemplar, to compare it with Week 1 and see how much we had progressed.

These challenges meant I learned more from Heather than just how to write Italian Hand. 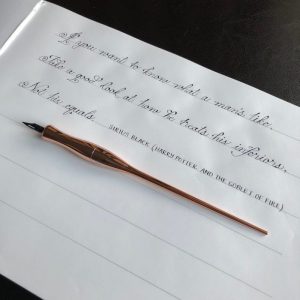 The warm-up exercises alone were a revelation and I think I’ve studied the variations in this script more than any other I’ve learned in the past.

I’ve also played around with different nibs and different letter heights to see what best suits my writing. I’ve even tried flourishing with a bit more purpose!

Heather’s teaching philosophy is just so lovely too, she is really calming and encouraging and I’ve had some lovely feedback from her via the group.

I still feel like I’ve got some way to go before I feel totally confident with the script, but I am enjoying the learning process. My training wheels are off now that boot camp has finished!

I have, however, felt right at home with Pointed Pen Uncials.

The script was designed by Mike Kecseg, who took a broad-edged, historical majuscule script and interpreted its round, broad and open characteristics with a pointed nib.

There are no ascenders, tiny descenders and the letters can be placed close together to create texture. 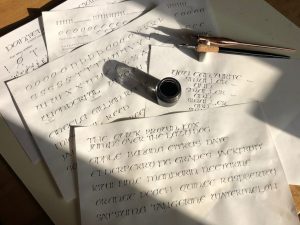 Letting the ink dry after the Pointed Pen Uncials workshop with Joy Daniels.

The pressure and release technique is the same as other pointed pen scripts, but there is more turning of the nib, which Joy demonstrated beautifully.

I couldn’t stop writing during the lesson – particularly once I got used to widening the letters after years of writing narrow Copperplate with a pointed nib – and I’ve continued ever since.

I’ve always thought Uncial is a perfect calligraphy script for Christmas as it looks so rustic – now I’ve got another alternative in my locker!