When Manuscript Pen Company announced it was launching an app for budding calligraphers, I was intrigued.

Callicreative brings the traditional heritage craft bang into the 21st century, with the aim of inspiring a new generation to pick up a calligraphy pen.

The pen in question is a Styluscript, which combines a traditional fountain pen with a touch-screen stylus to be used with the app.

Callicreative – available for Apple and Android tablets – was quick and easy to download. 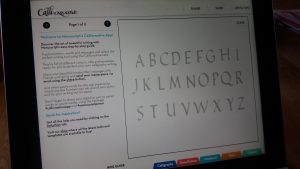 First impressions count and I loved the look of the app on screen.

The white background makes the black print stand out and looks clean and crisp – like a fresh sheet of practice paper!

Everything is very neatly laid out.

There is a handy guide, which appears to the left of the screen and can be hidden.

It provides clear, illustrated instructions on getting started, including pen angles, writing guidelines, strokes and spacing and two alphabets.

“You’ll enjoy handwriting like never before,” the final page of the guide boasts.

“Practicing calligraphy will improve your handwriting and become your new hobby.”

As well as calligraphy, you can use the app to draw and colour, or write and doodle freehand on various ‘paper’ styles.

The user can also choose from a range of ‘pens’ to use on screen – fountain pens with four nib widths and three marker pens, including Manuscript’s Callicreative markers.

There are also erasers so you can ‘rub out’ any mistakes!

The Styluscript pen was much easier to use than I had anticipated.

The stylus end of the pen is soft and very responsive, so the necessary thick and thin strokes and flourishes are easy to achieve.

The app is free to download from the App Store and Google play and the Styluscript, priced £9.99, is available in four colours – metallic blue, green, pink or bronze. 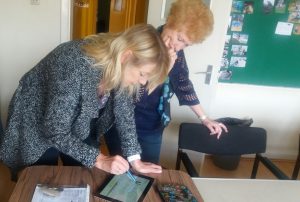 The app also allows you to share your creations with others via social media and has a link to the online store, as well as further hints and tips.

I asked my calligraphy workshop participants for their views on the app and the Styluscript pen, and they were very favourable.

The only niggles I picked up were being unable to zoom in and having to lift your hand off the screen to avoid random black marks appearing!

It’s perfect for beginners and with a recommended age of 4+ on the App Store, I might even see if my children fancy following in my footsteps!