THIS week I was proud to support a charity event for three very special little boys.

Technically, I was a sponsor, having created a seating plan for the Hat-trick! dinner free-of-charge.

But all I did was offer to help a former newsroom colleague, who did a tremendous job of pulling the whole thing together single-handedly.

I also had a good night out with my husband, my best friend and some former work colleagues.

The charity event at the Stadium of Light raised more than £4,000 for Team George, Bradley Lowery’s Fight and the Bubble Foundation, in aid of Finlay Kennedy.

Three-year-old Bradley is undergoing cancer treatment after being diagnosed with Stage 4 neuroblastoma in January 2013.

His family have set up a fund to raise £500,000 for any relapse treatment he may need, which is only available in the US.

Finlay, four, suffers from an undiagnosed immune system condition, the management of which has been made possible through the research and advances in immunology made by the Bubble Foundation. 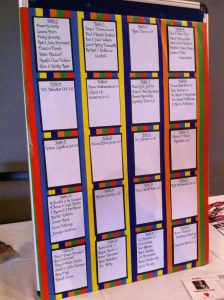 Four-year-old George also suffers from an undiagnosed condition affecting his gastro system, which has caused him a lot of serious health problems, and his family are also raising money to seek the advice of specialists in America.

When Finlay’s dad got up to thank everyone for their support – and offer some words of encouragement to the families of the other boys – it brought a lump to my throat.

Not for the first time, I realised how lucky I am to have two healthy children and I’ve been hugging them that little bit tighter ever since.