NEXT time you’re rattling along on the Metro in South Tyneside, look up from your book or your phone when you stop at Bede – it’ll be worth it!

The platforms at the station, tucked away in the middle of an industrial estate in Jarrow, have been given a burst of colour with the introduction of 10 new panels created by volunteers involved in a community art project. 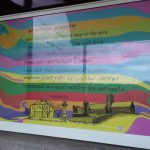 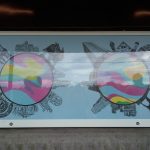 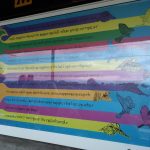 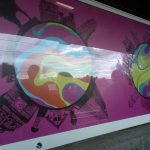 Mark Gibson, founder of the Hive Art Studios at Bede’s World in Jarrow, pulled everyone’s talents together to realise his vision for the artwork at the revamped Metro station, aptly named Convergence.

I’m extremely proud that my calligraphy features in five of the panels and, quite frankly, can’t believe that it’s there for thousands of Metro users a day to see.

I hope they’ll take the time to read it as they wait at the station, or peer out of the window as they pass through on their way to work or out shopping. 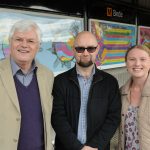 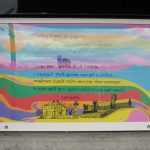 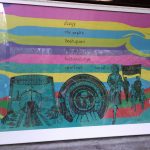 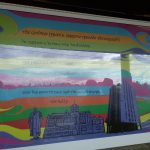 I was asked to write four pieces, a passage from The Venerable Bede’s Ecclesiastical History of the English People, and three poems by local writer Tom Kelly.

It was a pleasure to meet Tom at the unveiling and have him explain some of the meanings behind his work.

My writing was scanned in and manipulated digitally, along with the images produced by community groups and Mark’s artwork, to create the panels that are now on show and hopefully will be for some time to come!