That was the verdict of one girl during the first calligraphy workshop I’ve held at a school.

I spent a day in the classroom at Ridgeway Primary Academy in South Shields.

I was asked by the deputy headteacher to come in and work with the children after writing some commemorative scrolls for their Year 6 leavers earlier this year. 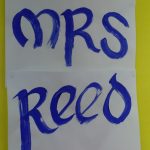 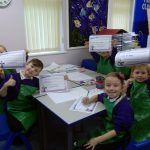 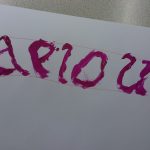 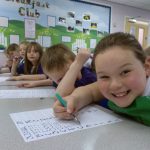 The prospect of working with over 100 five to 11-year-olds in one day was daunting – but I had a fab teacher friend with plenty of classroom experience to turn to for advice!

She told me it was all about getting them to write for a purpose, so we came up with a Halloween theme with spooky party invitations, spells and potion labels.

They weren’t going to write themselves – they needed some apprentice calligraphers to daub them with their new handwriting skills.

I opted for the uncial script – the alphabet’s easily recognisable, but still different enough to hold their attention (a tip from my calligraphy tutor). 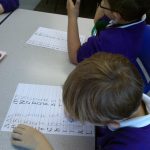 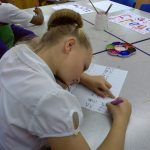 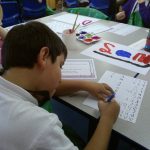 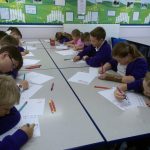 The younger children worked with paints and felt tips, while Years 3 to 6 were entrusted with the equipment kindly donated by the Manuscript Pen Company.

We drilled the letters a few times before starting our creepy activities. 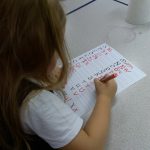 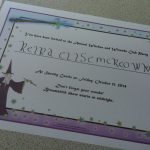 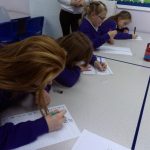 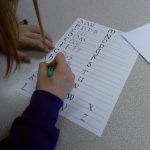 There were interesting approaches to the craft – one boy was writing upside down at one point, spinning his paper around rather than moving his pen to form an O!

We had a lot of fun, but one of the teachers told me the exercise had made one of her boys feel better about his handwriting. Priceless.

Deputy headteacher Alex Golden: “The children really enjoyed the workshops, and it was a great opportunity for them to value and explore writing in a new and exciting way.

“What made our day was a child from Year 3, who said ‘I usually find writing tricky, but today I’ve loved it!'”