Since setting up Creative Calligraphy, I’ve definitely found myself taking more notice of writing styles on anything and everything, from billboards to tattoos!

Fortunately, the museums and other visitor attractions of the north east have provided a wealth of calligraphy examples to delight and inspire me. 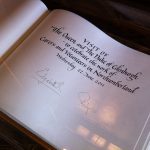 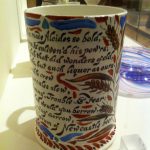 Tankard at The Shipley Art Gallery 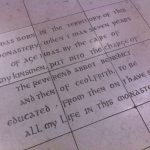 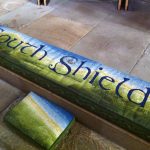 During a visit to Alnwick Castle in April, I was attracted to a special page in the visitor’s book, signed by HRH Queen Elizabeth II and the Duke of Edinburgh, with an inscription in calligraphy commemorating their visit in June 2011.

I was snapping away when I stopped off at the Shipley Art Gallery in Gateshead, where there were lots of lovely examples of calligraphy on ceramics – mainly tankards!

Bede’s World is, unsurprisingly, a haven for the uncial script used by the Venerable Bede and other monks of the twin monasteries of Wearmouth-Jarrow.

The great scholar’s quotes are carved into the stone flooring and etched on the walls.

There’s also a very colourful tapestry on the reception wall and while we’re on the theme of thread, Durham Cathedral also has some nice uncial script embroidered into prayer cushions. 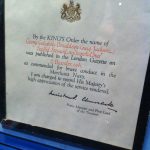 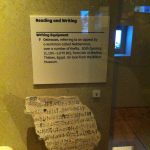 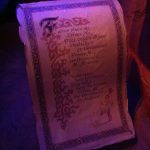 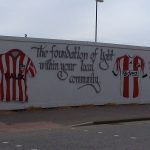 There are also some lovely awards and certificates among the exhibits at South Shields Museum and Art Gallery. I’ve even spotted some Egyptian writing equipment at The Great North Museum: Hancock.

I couldn’t even switch off on holiday, spying some Arabian-influenced calligraphy describing scenes in the Aladdin walk-through at Disneyland Paris!

And offering a more modern take on the craft, young people involved in the SAFC Foundation Kicks programme have been using graffiti-style calligraphy to decorate boards surrounding a building site in Southwick, Sunderland.

During the World Cup, I read an article about footballers’ tattoos – and immediately spotted the ornate writing within some of the elaborate designs.

It just goes to show that calligraphy doesn’t necessarily have to be written down on paper.

I’m looking forward to rooting out some more unusual finds as my children and I explore new venues over the summer holidays.