Jarrow Hall is the new name for the former home of Bede’s World in South Tyneside.

The site has been rebranded as an Anglo-Saxon village, farm and Bede Museum, after being taken over by Groundwork South Tyneside and Newcastle. 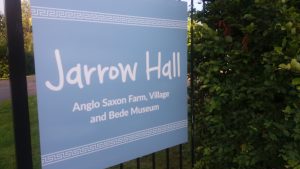 The not-for-profit organisation stepped in after the Bede’s World Charitable Trust fell into administration in February last year.

The sudden closure of Bede’s World shocked the community and a campaign was quickly started in a bid to save it as an important cultural asset.

(You can read the blog I wrote about its importance to Creative Calligraphy here.)

Groundwork South Tyneside and Newcastle is now keen to put the place on the map and take the ‘90s museum into the 21st century.

Ahead of its re-opening next month, businesses were invited to a showcase evening, to hear about the plans and how they could lend their support to Jarrow Hall. 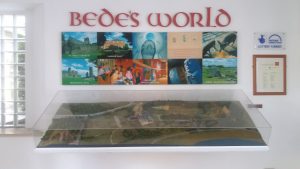 It will remain dedicated to the life and work of the Venerable Bede, who is widely regarded as the greatest of all the Anglo-Saxon scholars and the father of English history.

But there will be more built around it to create a unique visitor experience.

I was particularly interested in the planned studio space for artists, where visitors would be able to watch them at work and perhaps even have a go.

There is also potential for me to get involved in weddings and events, educational programmes and workshops.

Andrew Watts, executive director of Groundwork South Tyneside and Newcastle, said: “We are really excited that we can relaunch Jarrow Hall in October.

“To help us do that we have already had a lot of support from businesses across South Tyneside and the region.

“There are a lot of things we feel would help this site if the business community was able to support us with that vision.” 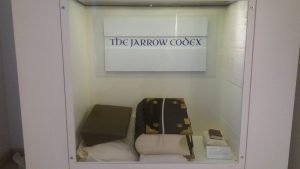 Improvements to the site are being made in phases, with the initial focus on the repair and maintenance of the Anglo-Saxon village and farm ready for the re-opening.

Changes will also be made inside the museum, with the Jarrow Codex taking pride of place and the creation of a new library and learning area for academics.

It all sounds very exciting and having been in South Tyneside for 25 years, Groundwork seems to me a very safe pair of hands to manage the site.

I look forward to attending the re-opening and working with Jarrow Hall in the future.