Quentin Blake draws with a scratchy pen dipped into a pot of Indian ink. 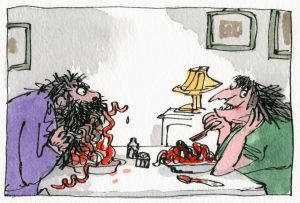 When he was drawing The Twits, he chose a particularly hard and scratchy nib.

When I asked my son why he thought this was, he said “to make them look messy”.

Not a bad observation for a seven-year-old!

As a calligrapher, this little piece of information obviously stood out during our family trip to the Inside Stories exhibition at the Laing Art Gallery in Newcastle.

The exhibition, from the House of Illustration, gives a unique insight into the origins of some of Blake’s most characteristic and popular creations.

I grew up with Blake’s illustrations and now my children are doing the same. 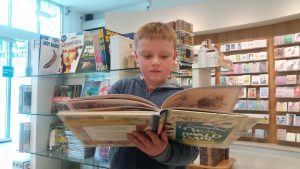 James in particular is a huge fan and loves to copy the pictures from his favourite Roald Dahl books, including The Twits and Charlie and the Chocolate Factory.

He’s quite the little artist, so I wanted to take him to the exhibition to inspire him and keep that fire going in his imagination.

It’s telling that I had to drag him away from the three drawing activity stations within the gallery space to show him various things on the walls around him.

Both he and his sister, Sophie, five, enjoyed making their own book mock-ups.

More than 100 pieces of original art are featured in Inside Stories, including storyboards, which reminded me of the page plans I used to work with as a journalist! 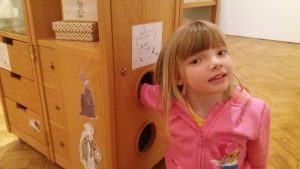 Sophie checking out the Inside Stories activity cube.

James loved following the story of how the illustrations for The Twits came about.

I loved that some of these roughs had bits of paper with alterations stuck over the top of the original – and I even spotted some correction fluid!

I’m not surprised that such revisions were needed though.

“Nothing in any of my books is drawn from life – it’s all invented on the page,” reads one of his quotes in the exhibition.

One of the things that stuck with James (according to what he wrote in his journal for school) was that Blake uses watercolour – and he now keeps trying to recreate the look with my brush pens. 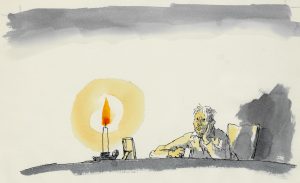 An illustration from Michael Rosen’s Sad

I haven’t yet told him that I own a box of watercolour paints!

The exhibition introduced me to two new books – Blake’s own picture book, The Dancing Frog, and Michael Rosen’s Sad.

I was particularly taken with the thought process behind the illustrations for the latter and the range of emotions Blake was able to convey with his simple broken line drawings.

I think it’s fair to say we all took something away from Inside Stories and I’m sure we’ll be back again.

The exhibition runs until July 8 and there’s a packed programme of events, from school holiday activities to adult classes and curator-led tours.