I’m delighted to be returning to Hawthorn Arts as part of its masterclass series of workshops.

This time I’ll be working with managing director and lead artist, Graham Hodgson, to give people the opportunity to combine calligraphy and illustration.

I have known Graham and his wife Anne for many years.

I used to love going into Hawthorn Arts when it was an art supplies shop and I’m still a regular visitor under its new guise as a workshop and gallery space. 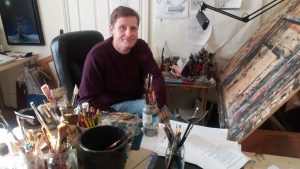 Graham Hodgson in his studio.

Graham is an extremely talented artist and illustrator and holds regular drawing and painting classes at Hawthorn Arts, in Westoe Road, South Shields.

His Auld Hands collection, inspired by the north east’s industrial heritage, is currently on display at Kirkleatham Museum in Redcar.

We’re working on a spring theme for our workshops, which will complement each other, but also stand alone. You don’t have to do them both.

So, if you’re interested in the calligraphy side of things, sign up to that, if you prefer illustration, sign up for that, or book up for both if you’re feeling really creative!

I’ll be guiding you through a simple calligraphy script, from getting to grips with a calligraphy pen, to ruling up guidelines, letter formation and layout.

Graham will then offer a session on illuminated letters, working with watercolour and inks. 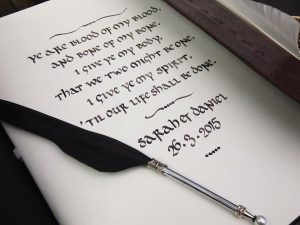 Inspired by the idea of illustrated letters and manuscripts, I thought uncial would be a good script to choose for the calligraphy side of things.

Uncial was commonly used between the 4th and 8th centuries by Latin and Greek scribes.

There are no lower case letters – the uncial alphabet consists of capital letters – and the letter heights are pretty uniform, so it’s perfect for beginners.

It’s always nice to have an aim to work towards when learning something new.

By the end of the session, I’m hoping people will be confident enough to write a few lines in uncial script and I’ve chosen a lovely text to help us along.

We’ll be using lines from the William Wordsworth poem, I Wandered Lonely as a Cloud, which also gives Graham plenty of scenic illustration options!

The illustration workshop takes place the following Saturday at the same time.

For more information, get in touch via our contact page.