Calligraphy and New York City are two of my favourite things.

So when I asked to help with a romantic proposal set to take place in the Big Apple, I was happy to oblige, particularly as I had also helped to break the news of the trip! 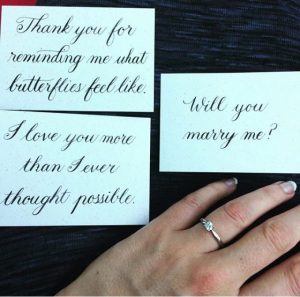 Jamie Gray first got in touch with at the start of the year as he put together a treasure hunt for his quiz-loving now fiancée, Gemma Spurr, to announce the surprise holiday.

I wrote a number of clues on cards that were placed in numbered envelopes and hidden around the grounds of a hotel they were staying in.

They eventually led back to their hotel room, where Gemma had to decipher the letters she had collected to spell out the destination.

For the proposal, Jamie had some special words he wanted me to write for Gemma – as well as a special note to go with the ring, should his bag be searched at any point!

I used the cards and envelopes that I received in a sample pack from Razzle Dazzle Rose, which worked beautifully, and handmade paper from Paperchase.

The calligraphy style was the oh-so-romantic traditional copperplate in simple but classic black ink. 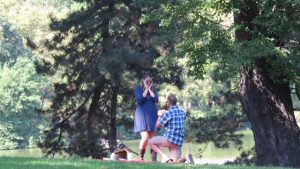 Jamie arranged a picnic in Central Park on the second day of their trip and a passer-by captured the moment he went down on one knee.

He said: “She said yes and it went absolutely brilliantly.”

I wish them all the very best for the future – and hopefully their wedding plans will include some more calligraphy as they are a lovely couple to work with!

It’s also worth pointing out that this is the third proposal I’ve been involved with and each one has resulted in an engagement.

It’s quite an honour to be asked to play a small part in such a big occasion and I love that my calligraphy has helped to record those special words forever.