May’s subscription box theme was Hergestellt in Deutschland – Made in Germany – featuring artisan products and premium brands made in – you guessed it – Germany. 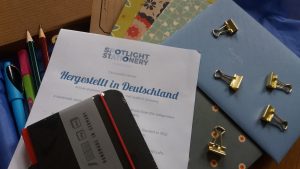 The first items I pulled out of the box were a handmade notebook and a selection of colourful patterned envelopes from Bindewerk, an independent bookbindery in southern Germany.

Hidden in a red envelope were brass coloured binder clips from Rico Design, a leading wholesaler of arts and crafts materials, based in Westfalen.

The envelope also contained a brass coloured, barrel-shaped pencil sharpener from family-owned Mobius & Ruppert, founded in 1922 and now in its fourth generation.

Two pens contained in the box – the Slider Memo XB and Line-up – came from another family-owned business, Schneider, which was established in 1938.

There were also two pencils from Stabilo – the Schwan 306 HB and Othello 282 2B – which was originally called Schwan-Stabilo and established in Nuremburg in 1855. 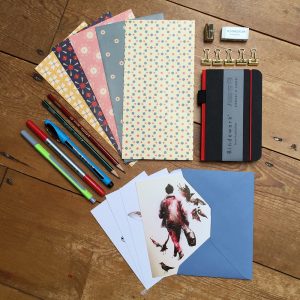 Johann Sebastian Staedtler began shipping pencils around the world from Nuremburg in 1840.

I already have a few Staedtler items in my pencil case, with their erasers being my favourite when it comes to rubbing out calligraphy guidelines.

I now have an extra eraser, as well as one of their double-ended fibre tip pens.

I’ve added the notebook to the pile I’ve kept aside from my previous boxes and the envelopes have motivated me to crack on with some responses to my InCoWriMo replies.

I’ve got quite a lot of postcards and notelets now thanks to Spotlight Stationery!

I’ve also put the pens, pencils, eraser, pencil sharpener and binder clips in a new pencil case and put it with my Daycraft journal from the Double Act box.

I’m starting a new part-time job soon, and if that isn’t an excuse to indulge in new stationery, I don’t know what is!