Brush lettering is not as easy as you think!

It’s something I’d really like to get the hang of this year and so far I’m sticking to my goal.

I’ve taken part in the #ShowMeYourDrills challenge run by The Happy Ever Crafter on Instagram.

I’ve also invested in her workbook for the next stage – #ShowMeYourLetters.

But there’s nothing quite like having someone to sit with you and show you the ropes.

So with that in mind, I booked on to a brush lettering workshop with The Crafthood.

They’re the only ones I’ve seen advertised in the north east! 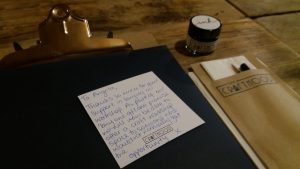 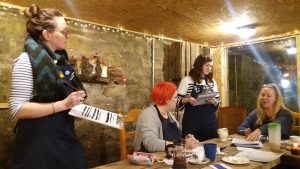 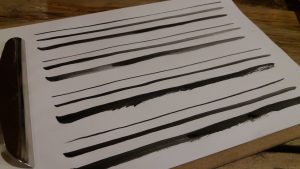 Kay and Sharon came to one of my Newcastle Does Vintage workshops last year and we were also involved in a wedding photoshoot together last summer.

So I’d like to think we’ve struck up a bit of a rapport and it was great to support them in their new venture.

I think it’s a lovely touch that for every workshop place booked, they gift one to charity. If you know of any good causes, they’d love to hear from you!

The workshop took place at The Green in Washington Village and the venue – in an outhouse to the rear of the main building – was beautifully decorated and very rustic.

There was definitely a hygge vibe as we got stuck into our craft over a hot chocolate and cake, surrounding by fairy lights and the scent of The Crafthood’s hand-poured candles.

Kay and Sharon got us warmed up with the brush first, showing us how to achieve varying thicknesses of strokes with sumi ink, before getting down to some basic drills.

I may have recognised them, but it’s totally different doing them with an actual brush rather than a brush pen and I think my calligraphy skills were more of a hindrance in this case!

Sharon pointed out that I was gripping my brush too hard and not using my hand enough.

All of my movements were coming from my finger and thumb, so I had to get used to writing from the wrist and gliding my hand up and down the paper.

Once I’d got the hang of this, I could see a drastic improvement and I was soon lettering away to the rhythm of the rather brilliant playlist Kay and Sharon had compiled. 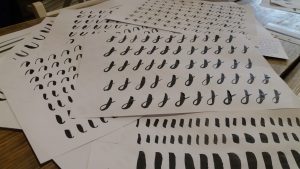 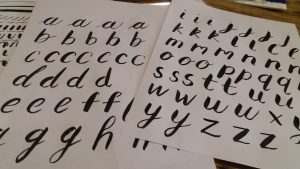 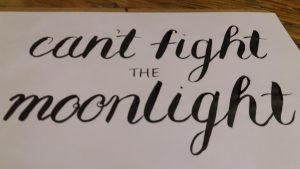 They basically left us to play around with the drills to form letters and come up with our own style.

For someone like me, who much prefers rules and sticking to them, this was a bit of a challenge!

I was already feeling slightly panicked by the lack of ruled guidelines on the page when doing the drills, but I persevered, although there was still a definite calligraphy slant to my writing.

By the end of the session, I felt confident enough to try putting together a few words, inspired by the last song I heard in the car as I pulled up outside.

The other four women taking part were very lovely and one of them actually recognised me from a workshop I did at her school, so we’re now Instagram buddies, as she runs her own business alongside teaching part-time.

It was nice to have just over two hours to sit down and focus on one thing and I will continue practising at home. I think this is the longest I’ve kept a new year’s resolution!

For more information about The Crafthood, you can check out their website here.